American Water Works Company, Inc (AWK) has been my favorite company to analyze. It is one of the few companies that I have covered that I feel is ran by disciplined and focused executives. Besides this, the company’s guidance usually is correct, and the profit margins are pretty stable. I will present my revenue estimates from my last AWK article and my updated DDM Valuation in this article.

In part one of this series, I mentioned how I was shocked that AWK lost $21 million (after-tax loss of $15 mn or $ 0.09 in EPS) due to the adverse effects of the coronavirus. I expected that the company would lose a couple of million because of the increase in delinquent accounts. Yet, I didn’t take into account that commercial/industrial loss in revenue would outweigh the growth in residential revenue. 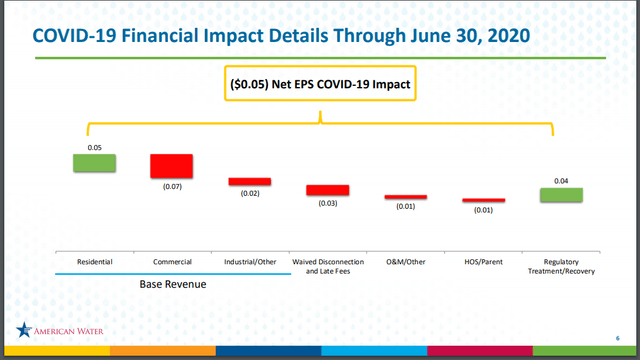 In my last article, I estimated that the company’s revenue would grow at a CAGR of 4.2%. This growth rate is based on the company’s guidance and historical revenue growth of each business segment as I will further detail below.

Wastewater and Other Business: 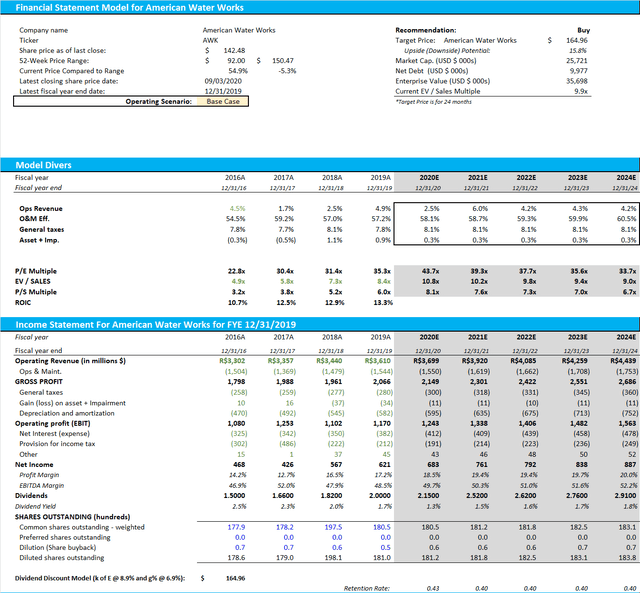 Operation and maintenance (Ops & Maint) calculations are based upon two assumptions. The first assumption is based on historical data. From 2015 to 2019, the company’s revenue grew at a CAGR of 3.4% while its Ops & Maint cost grew at 2.4%. When a company’s expenses grow at a rate slower than revenue grows, that demonstrates that the company is experiencing economies of scale. The second assumption is based on company guidance and my interpretation of the weight that the regulated business has on the total Ops & Maint Expenses.

The other operational expenses, like general taxes and depreciation, are based on historical data. Depreciation, of course, takes into account my assumption on capital expenditures, but even then, these assumptions are based on company guidance ($ 1.9 billion in 2020) and my belief that the company will continue to spend around $ 2 billion a year over the next few years.

According to the company’s guidance, they expect to grow their EPS and dividends at a CAGR between 7% to 10% (2019 to 2024). My estimates fall within that range but on the low end. I believe that I am on the low end of the range because my ops and maint estimates are bearish.

I am bullish on American Water Works because the company is experiencing economies of scale and has a disciplined approach to running the organization. My target price for AWK is $165, giving investors a possible upside of almost 16% in the next one to two years.

If you like what you read, please “Follow” me via Seeking Alpha. I typically only cover the Brazilian markets, the Robotics Industry, and the Food Industry.

Disclosure: I/we have no positions in any stocks mentioned, but may initiate a long position in AWK over the next 72 hours. I wrote this article myself, and it expresses my own opinions. I am not receiving compensation for it (other than from Seeking Alpha). I have no business relationship with any company whose stock is mentioned in this article.